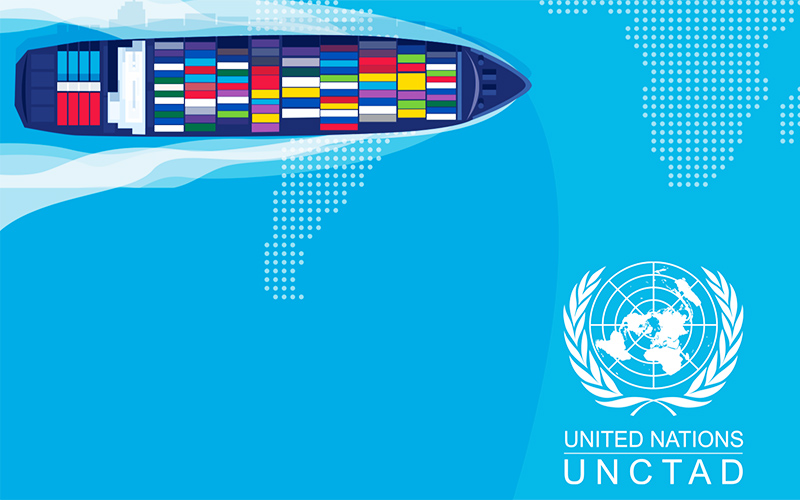 The war in the Ukraine is stifling trade and logistics of Ukraine and the Black Sea region. The search for alternate trade routes for Ukrainian goods has rapidly increased the demands on land and maritime transport infrastructure and services.

For Ukraine’s trading partners, many commodities now have to be sourced from further away. This has increased global vessel demand and the cost of shipping around the world.

Grains are of particular concern given the leading role of the Russian Federation and Ukraine in agrifood markets, and its nexus to food security and poverty reduction.

Grain prices and shipping costs have been on the rise since 2020, but the war in Ukraine has exacerbated this trend and reversed a temporary decline in shipping prices. Between February and May 2022, the price paid for the transport of dry bulk goods- such as grains- increased by nearly 60 per cent. The concomitant increase of grain prices and freight rates would lead to a nearly 4 per cent increase in consumer food prices globally. Almost half of this impact is due to higher shipping costs.

The Russian Federation is a giant in the global market for fuel and fertilizer, which are key inputs for farmers worldwide. Disruptions in their supply can lead to lower grain yields and higher prices, with serious consequences for global food security, particularly in vulnerable and food-import dependent economies.

The Russian Federation is also a leading oil and gas exporter. Confronted with trade restrictions and logistical challenges, the cost of oil and gas has increased as alternative sources of supply, often at more distant locations, are called upon.

Higher energy costs have led to higher marine bunker prices, increasing shipping costs for all sectors. By the end of May 2022, the global average price for very low sulphur fuel oil (VLSFO) had increased by 64 per cent with respect to the start of the year.

Global trade depends on a complex system of ports and ships that connect the world. If global trade is to flow more smoothly, it must be ensured that Ukrainian ports are open to international shipping and that collaboration among transport stakeholders continues to provide services. Alternative ways of transport must also be pursued. And investment in transport and trade facilitation should be fostered as well as the support for the most vulnerable economies.

Subscribe to our digest
Tweets by forward_trade
PrevPrevious PostSouth Africa to appeal against EU decision to reintroduce import regulations on oranges
Next PostSouth Africa concludes record table grape season, though UK down slightlyNext