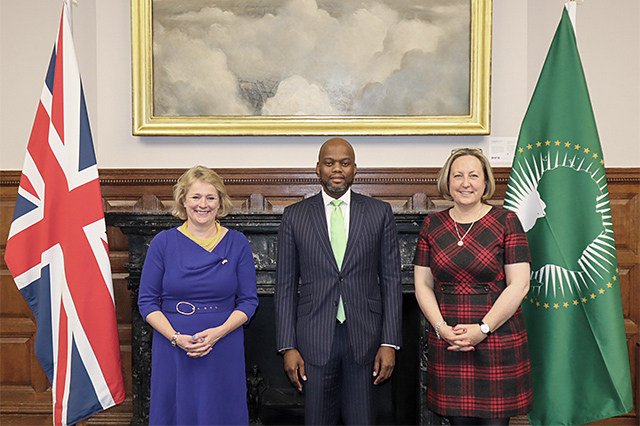 The UK is to support the implementation of the African Continental Free Trade Area, the world’s largest free trade area initiative.

Through the AfCFTA Support Programme, the Foreign Commonwealth and Development Office (FCDO) will provide up to £35m to provide trade facilitation and trade policy support to the AfCFTA Secretariat and Member States through TradeMark East Africa (TMEA), Overseas Development Institute (ODI) and other regional partners.

Announcement of the programme comes as AfCFTA Secretariat Secretary General Wamkele Mene visits London to discuss how the UK can continue its work as a strategic partner to the AfCFTA.

As the world’s largest free trade area, the AfCFTA has the potential to boost Africa’s economic growth by driving industrialisation, generating jobs and delivering prosperity across the continent.

For UK businesses, the trade bloc will remove market access barriers by creating a single continental market, making it easier and more cost-effective for UK businesses to export goods and services across the 54 AfCFTA member states.

As an independent free trading nation, the UK strongly supports the AfCFTA – the largest free trade area in the world.

We’re keen to see continued momentum on outstanding negotiations, and on practical implementation of the agreement on the ground.

This new aid programme shows that trade is a force for good, and will lead to increased trade, investment, and prosperity for both Africa and the UK.

We are pleased to receive this support from the Government of the UK, as it ushers us into a partnership for strengthening cooperation related to customs and trade facilitation and trade policy across the African continent.

In the last five years or so, we have seen the re-engineering of our Regional Economic Communities, to take into consideration the aspirations that are embedded in the AfCFTA instruments. We have also witnessed during this period the enthusiasm and the energy of our private sector to rise to the occasion and begin to exploit what is provided for in the Agreement.

Our ambition now is to see commercially meaningful trading in ‘Made in the AfCFTA’ products taking place, across the length and breadth of our continent, to create jobs and economic opportunities for Africans, especially women and the youth. We want to make trade easier for the Africans, in particular our women and young Africans who trade across our borders.

This new AfCFTA support programme is, therefore, timely to facilitate the implementation of the AfCFTA, through supporting national implementation committees and regional economic communities.

Closer integration between African economies boosts growth across the continent creates opportunities and helps lift people out of poverty.

The UK is a committed partner in this mission. This UK funding will promote long-term partnerships between African countries and support a more prosperous, greener continent.

I am delighted to be supporting the AfCFTA Secretariat and its Member States to deliver freer and fairer trade systems in Africa.

The programme builds on existing work from the FCDO and DIT Trade for Development unit to strengthen partnerships and resilience in Africa.

Under the UK’s G7 presidency last year, the new British Investment International (BII) group pledged to work with other G7 Development Finance Institutions (DFIs) to invest at least $80 billion in the African private sector by 2027.

Support for projects in Africa from UK Export Finance is also at its highest in decades, backing a range of infrastructure projects in countries from Côte d’Ivoire to Uganda, with more than £2.3 billion of financial support in the past year.

The AfCFTA Support Programme also complements the UK’s broader partnership with the African Union as a multilateral institution to promote global values.

Alongside the Secretary of State for International Trade and Minister for Africa, Secretary General Mene will meet with members of the UK’s business and investor community while in London.