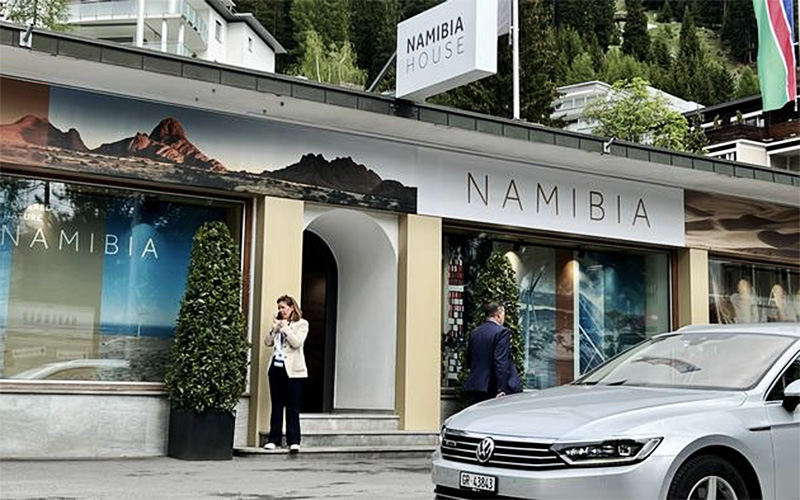 With the European Union looking to ditch Russian oil and gas, the African country says it could not only help bridge the gap but also bolster the bloc’s green push thanks to abundant sunshine and high wind speeds.

It’s difficult to miss the Namibia House on Davos Promenade. The Namibian residence is plastered with posters exhorting potential investors to take a bet on its renewable potential.

Inside, the place is buzzing with activity, with murmurs of casual business interactions on the ground floor and exhaustive investment sessions a level below; Namibia seems to be making the most of its debut at the annual World Economic Forum meeting of the global elite in the Swiss Alpine town of Davos.

Among the things on sale: sunshine and wind. Namibia with a long coastline on the South Atlantic is among the driest countries in the world with 3,500 hours of sunshine per year. The country of 2.5 million is now looking to harness the sun and wind to produce so-called green hydrogen from seawater, an energy source the European Union is banking on as it seeks to cut its reliance on fossil fuels to combat climate change.

“Here’s a country that has the requisite resources. Here’s a country that is serious at play,” said Obeth Kandjoze, chairperson of Namibia’s Green Hydrogen Council. “And here we are at the WEF [World Economic Forum], saying we are ready for business. So, that’s the sales pitch.”

Green hydrogen, which unlike grey hydrogen is produced by separating hydrogen molecules from water using renewable energy, is a key pillar of the European Union’s plan to become climate-neutral by 2050 and wean itself off Russian oil and gas.

This month, the European Commission, while doubling the EU hydrogen targets for 2030 as part of the REPowerEU plan, said it was looking to import 10 million tons of renewable hydrogen annually to replace fossil fuels in several industries and vehicles.

Eager to grab a pie of that cake, Namibian officials have been touring European capitals, including Berlin and Paris, over the past months. The southern African country, which counts diamonds and uranium among its main exports, has received expressions of interest from the likes of Germany, Belgium and the Netherlands.

The interest and inquiries have only gone up since Russia’s invasion of Ukraine in February, Kandjoze, who is also the head of Namibia’s National Planning Commission, told DW.

Berlin has pledged €40 million ($42.6 million) to help its former colony develop the future energy source. The German government expects one kilogram of hydrogen from Namibia to eventually cost between €1.50 and €2.00.

“This would be the most competitive price in the world which would be a huge locational advantage for hydrogen ‘made in Namibia,'” former German Research Minister Anja Karliczek said in August last year at the time of signing a hydrogen pact with the African country. “We need large amounts of hydrogen and we need it quickly and at low cost. Namibia can provide both.”

Namibia, one of the most politically stable countries in the region, has seen its economy struggle in recent years due to a sharp drop in commodity prices, drought, the COVID-19 pandemic and now the war in Ukraine, which has pushed prices and stoked food shortages. The country relies on imported electricity to meet much of its needs.

The country, which is the first in Africa to add environmental protection to its constitution, is hoping green hydrogen will help turn its fortunes.

It has selected Germany’s Enertrag-backed Hyphen Hydrogen Energy to develop the country’s first mega green hydrogen project in the southwest. The project would ultimately produce up to 300,000 tons of green hydrogen per year.

The scheme is expected to cost around $10 billion, a steep investment in a country whose gross domestic product is just $12 billion. Kandjoze says Hyphen is already scouting for funds.

“So far, we’ve not tested the market but we believe we’ve got what it takes to be able to pull this one off,” Kandjoze said.

Green hydrogen currently constitutes just a fraction of total hydrogen production. The technology is still not fully proven on a big scale, making it a rather risky bet.

There are other concerns. The electrolysis process to separate hydrogen molecules from water is expensive. Producing green hydrogen is even more costly when seawater is used, as Namibia plans to, because then the water has to first go through an expensive desalination process. Transporting hydrogen remains challenging.

“We rather take the risks for a better future, risk all that money to help clean up the environment,” Kandjoze said. “We are a country that suffers excruciating drought one season and flooding the next. We better stomach that risk than simply wait.”

At the Namibia House in Davos, the green hydrogen pitch appears to have intrigued potential investors. The investment session on the topic in the presence of Namibian President Hage Geingob was overbooked.

“We are overwhelmed by the interest that we are experiencing here in Davos from all sort of development agencies, funding agencies, technology partners,” Sven Thieme, executive chairman of O&L, Namibia’s largest privately held group of companies which is also building a green hydrogen plant as a pilot project, told DW.