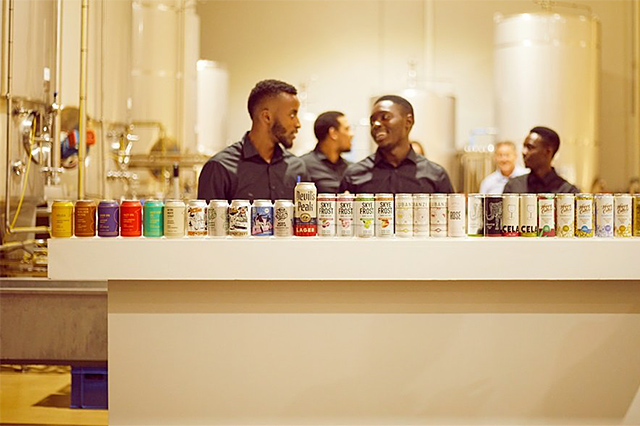 Inspired in 2019 by the growth of mobile and micro canning in the United States, primarily spurred on by the burgeoning craft beer industry, local entrepreneur Tom Riley imported a high-end canning system to South Africa and started Tiny Keg.

His idea was to travel with the mobile canning unit to craft breweries around the Western Cape who by default would bottle beer instead of using more practical and efficient cans that better preserved the beer. Given that beer doesn’t move well, big canning operations often locate themselves at major breweries, and have minimum order runs that made it unattainable for the smaller businesses – even if they could get their beer to their doors.

The business was a near-instant success. By June of the same year, Tiny Keg had canned 100,000 beers for various craft brewers around the Cape. A few months later, they were among the first in South Africa to start canning wines. And within 12 months of starting the business, Tiny Keg quickly hit the 1 million can mark – a number they tripled a year later.

Now just three years old, Tiny Keg has packaged more than 6 million cans, including beer for close to half of South Africa’s craft beer industry and most of the country’s canned wines – including a job for global drink giant AB InBev’s BABE canned wine.

Although the global bottle shortage may have spurred on Tiny Keg’s recent growth, Riley says its main benefit was to showcase the virtues of cans over bottles in this country.

“There are several pull factors towards cans – they’re easier and cheaper to transport and more convenient for businesses and consumers. And environmental factors such as infinite recyclability and a small carbon footprint increase their appeal – modern consumers are subverting convention and putting more currency on sustainability and choice,” says Riley.

Although South Africans have bought into the vigorous marketing of bottles, Riley argues that cans make a lot more sense than breakable, heavy, un-stackable, and light- and oxygen-leaching glass.

“Beer is also very susceptible to oxidation and does not travel well unpackaged – it’s not common practice to move beer to packaging facilities. It is mostly packaged where it’s produced.”

For this reason, mobile canning businesses have grown in the US alongside the explosion of craft beer. And with most craft breweries focused on creating the best beer, many failed to think how they’d get their products to market.

“When we started, craft beers were almost exclusively in bottles. What we offered was the option of shifting to can, which is better for the beer and far easier to store and transport, without the breweries having to move their product,” says Riley.

Many small breweries now have their own manual canning machines that they use for small runs of limited edition beers sold directly out of taprooms. Given the difficulties craft breweries have faced in the last two years, Riley says many have moved away from larger retail and distribution.

“We now supply cans to many of these brewers. To some extent, we enabled and pushed this shift, and in the initial year did lots of different craft beer brands. Given that can suppliers only accept large orders – full truck-loads – we break these bulk orders and supply to smaller brewers,” Riley says.

Tiny Keg’s model has therefore shifted slightly since the early days, and now established drink manufacturers are using them to test new products and ranges and get new concepts to market. Central to this are products like canned wine, kombucha, and other ready to drink concepts.

“There are lots of beverage producers in South Africa and even more entrepreneurs with great ideas for new brands, so there’s no shortage of customers looking to can,” says Riley.

As Tiny Keg’s customer base expanded, they imported a second mobile canning unit and moved to bigger premises to increase their output and offerings. Although they remain mobile and able to travel to wine farms and breweries to can on-site, the move means they can now receive liquids and mix, cool, and carbonated beverages.

“We expanded along these lines because we saw increased demand in carbonated wine and other ready-to-drink carbonated products like gin and tonic and cocktails. Previously we would have to use a third-party facility, but that comes with its challenges and additional costs, so we brought this all in-house,” says Riley.

In addition, the company now has space to manage pack-off operations, has more options for branding the cans, and are able to store customer products and dry goods, which helps with their export customers – where much of the business’s expansion plans lie.