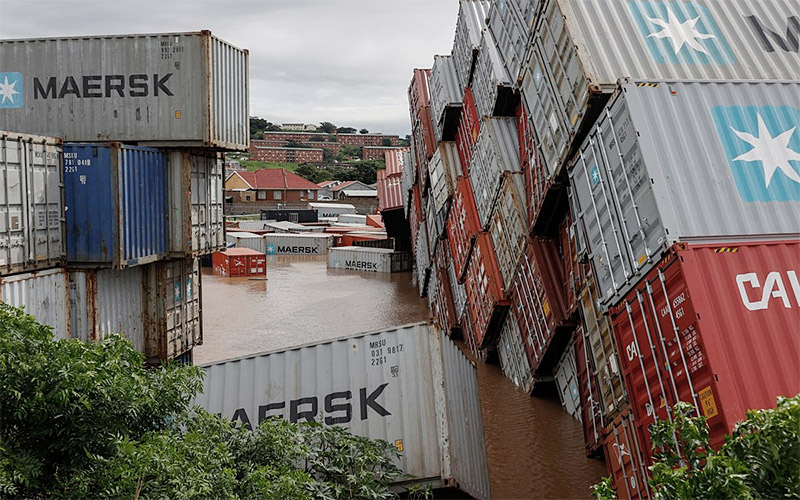 Transnet, the operator of South Africa’s ports, reported that it was gradually resuming operations at the Port of Durban after a 36-hour total suspension of operations and ship movements due to severe rains that caused unprecedented flooding across parts of the country.

The Department of Public Enterprises is working with Transnet and stakeholders including the provincial government to stabilize port operations and access the full extent of the damage.

The South African Weather Service blamed what it called exceptionally heavy rainfall that exceeded all weather forecasts on a phenomenon known as a cut-off low when the weather system becomes stationary over an area detached from the directional winds in the upper atmosphere.

The rains are being called the heaviest in six decades with one weather site in Durban measuring 16 inches of rain between Saturday, April 9 and Tuesday, April 12. Other areas reported rainfall equal to five months of rain in one day, prompting the government to call it the worst weather in the history of the country.

Across Durban and parts of the country, there are scenes of utter devastation and flooding. Late reports are putting the death toll over 250 people up from early estimates of between 45 and 60 in Durban.  Transnet National Ports Authority reported using its helicopters, that it managed to rescue 80 people trapped in various flooded areas around Durban on Tuesday.

Durban is South Africa’s busiest port with operations accounting for approximately two-thirds of all the containers moved through the country’s ports. In addition to container operations, the port is also a vital hub for mineral exports and trade. It also handles transshipment cargo for neighboring landlocked countries including Botswana, Malawi, Zambia, and Zimbabwe.

Transnet said there had been no major incidents at the terminals but on Monday evening, April 11 announced that it was for precautionary measures suspending operations at the Durban Terminals.

Ship movements in and out of the port were also suspended. Port operations at Richards Bay to the northwest of Durban continued to operate at limited capacity, but Transnet warned that the operations were operating “less efficiently with challenges experienced in handling wet cargo.”

Pictures being posted on social media show the extent of the damage to homes, businesses, and parts of the city with roads washed away and whole areas underwater. At the port, containers are strewn about with stacks having collapsed. Transnet reported that it was prioritizing efforts today to evacuate food, medical supplies, and petroleum products from the port.

President @CyrilRamaphosa visits flood-stricken parts of KwaZulu-Natal to offer support to affected communities and assess the response of government and civil society to this critical situation. #KZNFloods pic.twitter.com/ZEssD4Pjaw

As of this morning, Transnet said in a statement that “All critical safety inspections will be conducted before a full resumption in operations, to ensure that equipment and infrastructure are safe to use.” An initial assessment showed that repairs would be required to the main access road to the container terminals. They were investigating alternate access roads due to a washout on parts of the road. Electricity was being restored to parts of the city and while Transnet said there was no damage to the pipelines that supply fuel inland, they said they were still working to determine the extent of damage to the rail network before any train service into and out of the port can resume.

Shipping, which was suspended as a result of extensive debris caused by the rains and floods, is expected to resume once safety has been established for marine craft and vessel navigation. AIS signals show vessels from the major shipping lines, including CMA CGM, COSCO, Hapag, MSC, and others, all waiting at the terminals. Another two dozen or more ships are outside the port at the anchorage.

The suspension of operations at the port is the latest in a series of misfortunes that have befallen South Africa’s ports in recent months which include civil unrest, violence and protests, cyberattacks, and fires. Transnet had announced plans to set up a special entity company to operate the ports as part of a $7 billion plan to modernize operations to improve efficiency, eliminate congestion, and reclaim its status as the best-performing port in Africa.