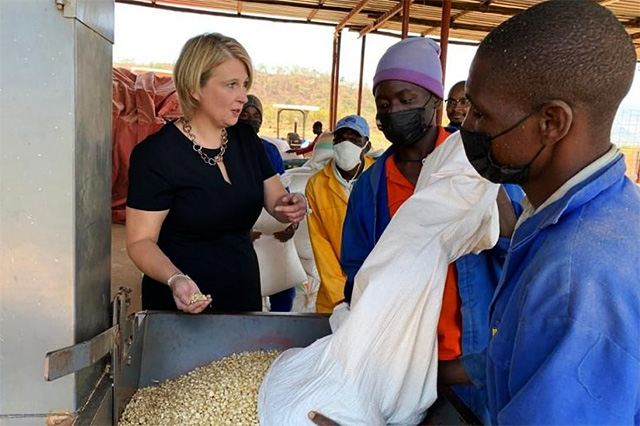 The  British Prime Minister’s Trade Envoy to Mozambique., Katherine Fletcher, visited Mozambique from 11 to 15 October and held a meeting with President of the Republic Filipe Nyusi in Maputo, O País reports.

According to a press release from the British High Commission in Maputo, during the meeting with President Nyusi, Fletcher welcomed the increase in trade between Mozambique and the United Kingdom and highlighted specific opportunities in the sectors of renewable energy and agriculture.

The British envoy also congratulated the Mozambican Government for sending a delegation, led by Prime Minister Carlos Agostinho do Rosário, to attend the United Nations Conference of the Parties on Climate Change (COP26) in Glasgow, between 31 October and 12 November of 2021.

Fletcher’s visit had, additionally, the objectives of promoting long-term mutually beneficial partnerships that promote sustainable development for Mozambique and the United Kingdom, in the areas of agriculture, technology and railways and ports infrastructure; and emphasised the UK’s commitment to working with Mozambique on women’s economic empowerment.

“The UK believes in a mutually beneficial commercial and business partnership with Mozambique. It was nice to see that Gorongosa coffee can now be purchased in the UK. British companies in the agro-industrial sector employ more than 400,000 Mozambicans across the country and are making an important contribution to this prosperous future. But we want more partnerships,” said Fletcher.

Also in Mozambique, Fletcher held meetings with the Minister of Mineral Resources and Energy, Max Tonela; of National Defense, Jaime Neto, of Agriculture and Rural Development, Celso Correia, with the President of the Tax Authority, Amélia Muendane, and other senior dignitaries of the Mozambican Government.

Katherine Fletcher began her visit in Manica province, where she met British companies operating in the agricultural sector and Secretary of State Edson Macuácua.

She also visited Gorongosa National Park (PNG) projects to explore opportunities to facilitate increased exports of coffee and honey to the UK; understand the park’s agricultural activities and tap opportunities for collaboration in the sector, including promoting British expertise in agro-technology, women’s economic empowerment programs and highlighting Gorongosa’s contribution to building climate resilience, creating jobs in the green economy and carbon credit projects.

Finally, Katherine Fletcher,visited the Port of Beira to reiterate and strengthen commercial ties between the UK and Mozambique and identify investment opportunities and bring in the knowledge needed to support port efficiency and sustainability.

Thank you to the Port of Beira, one of the largest in Africa, for hosting us on their site. We discussed UK opportunities to invest and support regional trade facilitation between 🇲🇿🇬🇧. @ukinmozambique @Tradegovuk @pcachine @nnenneuk pic.twitter.com/9NMJXOX3o9