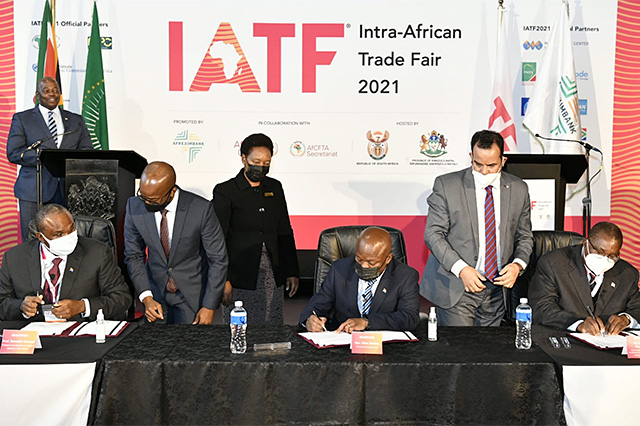 Most of the more than 80 government-supported South African companies which showcased their products and services at the week-long Intra-African Trade Fair (IATF), which ended Durban on Sunday expressed great satisfaction with the event. They held fruitful engagements and reported sales of over R3 million at the stand, as well as projected sales to the value of about R86 million  expected over the next six months as deals continue to be sealed and delivered . This is according to the Chief Director of Trade Invest Africa at the Department of Trade, Industry and Competition (the dtic), Mr John Rocha.

“The trade fair was a vehicle for us to execute our mandate as a department to increase, expand and diversify markets for the export of South African goods and services into Africa, and position South Africa as the partner of choice,” says Rocha.

According to Rocha, the trade fair offered an opportunity to showcase the best of South African local manufacturing capability in order to increase intra-African trade and the South African firms took the opportunity to build linkages with potential partners, buyers and investors from across the continent.

Rocha reiterated the importance of improving the logistics and infrastructure for the goods to move smoothly, efficiently and cost-effectively across Africa. More importantly, he said South Africa is committed to promoting intra-African trade and the growth of the African continent through the African Continental Free Trade Area (AfCFTA).

“The hard work starts now. As government we will continue creating an enabling environment for companies to flourish and open-up markets for them to trade and invest. We would like to encourage companies to follow-up on trade leads acquired during the trade fair in order for them to be translated into deals,” adds Rocha.

The Managing Director of SA Ladder, Mr Thomani Lekgade says the show has been excellent to his company as he signed and closed deals with Zimbabwean and KwaZulu-Natal companies.  He says he also held fruitful meetings and obtained good leads that he will be following up on. SA Ladder manufactures ladders, trolleys, castors, wheels, store bins, scaffolding and ladder accessories for Southern African and other international markets.

The owner of a diamond and jewellery manufacturing company Momo Mega Empire, which trades as T3 Diamonds, Mr Tshepo Molusi says he received good reception at the trade fair.  He says he made key contacts from Zimbabwe, Chad and Central African Republic who want to engage further to discuss how they can work together and create a value chain from raw material up to processing. Importantly, Molusi says he also made sales at the stand.

The South African companies that exhibited in the South African pavilion were funded by the dtic under its Export Marketing and Investment Assistance (EMIA), whose objective is to develop new export markets for South African products and the KwaZulu-National Provincial Government supported 30 companies.