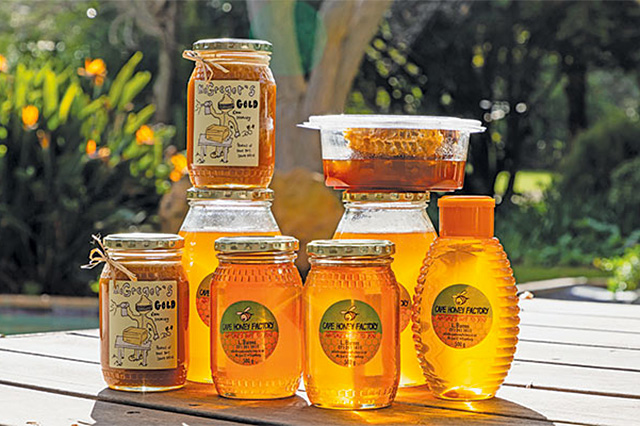 Beekeepers have used wood for their hives since time immemorial, and beekeeper Ryno Barnes of Hout Bay in the Western Cape was no exception. Wood is natural, safe, easy to work with and relatively affordable.

About five years ago, however, a growing concern about deforestation led Barnes to start looking for material to replace wood in his beehives. Plastic, he explains, is unsuitable as it is non-recyclable and bees are put off by its smell.

“Plastic can be chemically treated to overcome the smell, but this could negatively affect bee health and the environment,” he says.

After three years, he more or less gave up his search, as it appeared to be going nowhere.

Then in 2020, an engineer mentioned to him that a British company was using polyvinyl chloride (PVC) foam board in medical centres and retail shelves. The material seemed promising, so he imported some boards of it and built a number of Langstroth hives. “I stuck with the Langstroth design, because it’s easy to transport and work with,” he explains.

During tests this year, Barnes found that the hives not only ticked all the right boxes for him, but offered additional benefits, too.

“I was so satisfied with the product that I entered into a supply agreement with the manufacturer to become the sole supplier of hives made from its PVC foam board. I then started the company Giro Hives as an extension of our family beekeeping business, the Cape Honey Factory,” he says.

Since then, he has replaced 280 of Cape Honey’s old hives with new ones, keeping the wooden hives for catching swarms.

Barnes says that PVC foam board is far superior to plastic as it is recyclable, eco-friendly, and does not repel bees.

“We didn’t experience any problems in settling swarms in the new hives. They took to them as they did to wooden ones.”

He adds that PVC foam board is also far more durable than wood, being waterproof, UV-, weather-, chemical- and fire-resistant. For this reason, he sells the hives with a three-year warranty.

In addition, the material is formaldehyde-free and has thermal properties that help to keep the interior of the hive at a constant, comfortable temperature.

Even though it is antibacterial, the material does not offer protection against American foulbrood, a disease that is decimating bee colonies across the world. Barnes explains that this bacterial disease, which destroys the brood, is transmitted and dispersed by various vectors, including worker bees.

The material, nevertheless, is termite-proof, which also helps to lengthen the life of the hive.

“It specifically helps to [keep wax moths at bay], which at this stage are an even greater problem than American foulbrood,” says Barnes.

Wax moths drill holes and lay their eggs in the frames of wooden hives. Their burrowing larvae gnaw through the wood, destroying entire combs, taking over hives and ultimately driving the bees out of the colony. Barnes says wax moth is especially prevalent in areas where pine and Eucalyptus trees are widespread; fynbos areas are less affected.

Another advantage of PVC foam board is that it weighs up to one-third less than wood, making it much easier to work with. This is important, as a standard hive can weigh anything from 30kg to 50kg. The material is also slightly cheaper than wood.

“The hives can be ordered online from us, assembled or unassembled, and we have an established agent in Namibia. We’re in negotiations with some agricultural retailers that stock wooden hives to include Giro Hives in their offering,” says Barnes.

Being the sole owner of the hives, he is also looking for export opportunities and agents to help manage sales. “At the moment, it’s cheaper for the British company to export the material to South Africa, and then import the finished product to be sold there.”

The hives can be produced in various colours, but Barnes is reluctant to do this, as painting a hive could diminish its UV protection, which in turn could reduce its longevity.
Basic care of the hives is no different to that of the standard wooden ones; they require some annual maintenance such as repairing and replacing damaged parts, replacing wax, and installing excluders and supers.

The family’s innovation does not end with Giro Hives. They are also the first and probably only company in South Africa to have developed a propolis tincture issued with a Certificate of Analysis.

Barnes explains that propolis, which bees produce as a sealant, has antiseptic, antioxidant and antibacterial properties and can be used to treat candida, throat infections, eczema, emphysema, bacterial ailments and cuts, and boosts immunity.

“People who buy propolis do so for health reasons, so they look for an organic, standardised product.”

Barnes started experimenting with propolis tincture formulas in 2016. His research and product testing resulted in a perfectly balanced tincture made of raw organic propolis that can be used in beauty and wellness formulas, topically or intravenously, and is sold via their company, Propolis Africa.

“There are three different strengths of propolis sold internationally: 35%, 55% and 75%. Ours used to be stronger than 75%, which was not allowed, so we had to reduce the content.”

Certification of the tincture is done through Afriplex. “It’s really expensive, as each batch needs to be tested, but we decided to do this in order to differentiate our product from others and give consumers peace of mind,” he says.

Barnes says South African consumers are not as aware of the benefits of propolis as people elsewhere, and the same applies to honey.

“People usually buy honey for its health benefits. The problem is that the market is flooded with imported honey, and this, by law, has to be irradiated, which destroys the healthy enzymes in the honey. Adulterated product is another problem; some of these products don’t contain any honey.”

Barnes, however, is confident that government and the South African Bee Industry Organisation is raising awareness and clamping down on this problem, with many consumers now specifically looking for raw honey, and buyers who used to import products now looking for local suppliers.

“People are not afraid to spend money on honey, but they don’t want to waste their money on an inferior product,” he says.

The benefits of some of South Africa’s honey products are also undersold. “New Zealanders have done a sterling job in positioning manuka honey as the best in the world, but tests have confirmed that fynbos honey is even better. Also, if you’re going to buy honey to help for hay fever, the honey should be from the region where you live,” says Barnes.

Vandalism is another problem. “Sadly, most of the theft is committed by beekeepers, driven by the shortage of bees as pollinators and to produce honey. A beekeeper in Swellendam lost 150 hives in one night, and it’s a problem everywhere. It’s not only the hive that you lose, but the swarm as well as the income that would have been generated by pollination services and honey.”

Barnes is nevertheless optimistic about the opportunities offered by the industry. “There’s a great demand for beekeepers, as there simply aren’t enough bees to satisfy the growing demand for honey and pollination services, because of the impact of American foulbrood, European foulbrood and vandalism.”