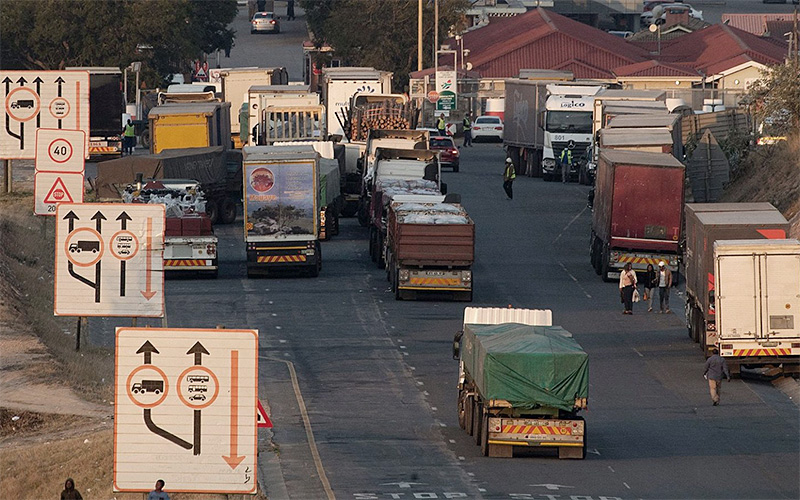 The Department of Home Affairs plans to issue a public request for proposals “in a few months’ time” for an ambitious R6 billion project to completely overhaul and rebuild South Africa’s six busiest border posts, Minister of Home Affairs Aaron Motsoaledi has confirmed.

Responding to a Moneyweb question during a joint briefing with Transport Minister Fikile Mbalula on Monday related to addressing trucking blockades, Dr Motsoaledi said the planned border post upgrade project is linked to the African Continental Free Trade Area (AfCFTA) agreement and is to ensure the border posts have appropriate infrastructure.

Motsoaledi said the Beitbridge and Lebombo border posts must be completely overhauled.

“If you go there [Lebombo border post] you will find trucks queuing for about 20km. That embarrasses us. It’s not good for the AfCFTA,” he said.

“The project is going to be a PPP [public-private partnership] and is going to cost more than R6 billion. In fact, it is a minimum R6 billion project.”

The six border posts to be overhauled and upgraded are:

This is Raubex’s single biggest contract to date and involves the upgrading of the Zimbabwe border post and the development of a town, dam and infrastructure around the border post.

The project is largely being funded by South African banks, with Raubex being paid in US dollars.

Raubex CEO Rudolf Fourie said on Tuesday they are scheduled to complete the Zim Borders contract in April 2023 and the company will be very interested in bidding for the South Africa border post project.

He said Raubex will specifically be “very keen” on the Beitbridge border upgrade project on the SA side because the company already has massive plant and equipment in Musina, Limpopo.

“We are looking forward to it [the project]. It suits us to a ‘T’. We don’t know if we can do all of them. It depends on the nature of the scope of the project,” he added.

Fourie said they have not yet received details about the project, such as what the Department of Home Affairs wants, the design, and whether it is a 20-year PPP project.

He said it has also not yet been confirmed if the department will bring out each border post upgrade as a package.

“If it’s one project [package], we will have to tie up with somebody in a JV [joint venture] because it’s quite big. If it’s specific packages, we will probably go [bid] for two border posts.”

JSE-listed construction and engineering group WBHO is also expected to be interested in bidding for the project, while unlisted smaller contractors such as Concor, Grinaker-LTA and Hillary Construction, are expected to submit bids in joint ventures because of balance sheet limitations.

He said the road freight and logistics industry has spent more than 10 years changing the way in which freight is cleared, noting that there is now a system where freight is literally cleared online, called electronic clearing – a system similar to how people file their income tax returns.

Kelly noted that the pre-clearing is done at the point of loading for two reasons.

“Should they want to do an inspection, they can do it where it’s being loaded, which is important for goods that can be destroyed, either perishable goods or goods of a high value. Secondly, it takes away the congestion at the border itself because a fair amount of time was spent working out duties [and so on], and then getting those paid and getting through this queue,” he explained.

“It means now that if you get pre-cleared, you can literally drive through the border. It is the process of trying to get the freight and logistics chains operating far more efficiently.”

Kelly said physical clearing is one of the reasons there is so much corruption and they have tried to address that through pre-clearing.

Kelly believes the border post upgrades will be about processing buses of people or individuals and making the actual border post infrastructure more user-friendly, including having far more ablutions and toilets, places to get water and something to eat and to park safely without being looted while standing in the queue.

“Those 20km queues at Lebombo should be gone because we have got that border operating 24 hours a day, seven days a week, which it wasn’t doing, and we have definitely impressed upon our members to do pre-clearing.”