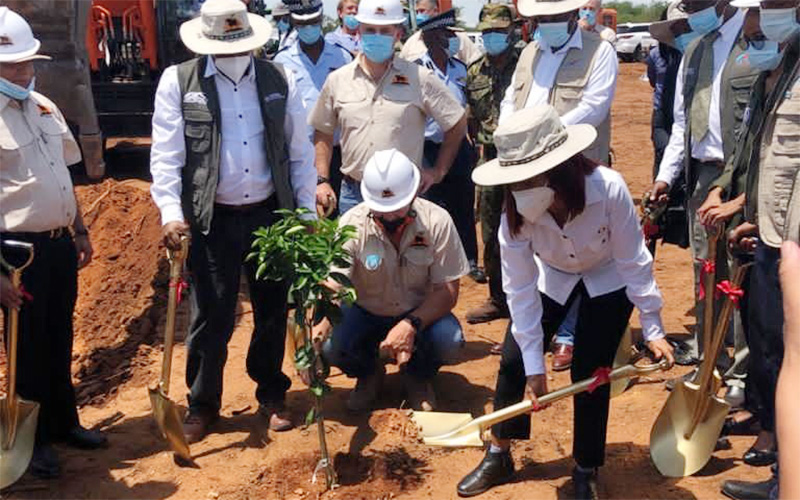 The Selebi-Phikwe Citrus Project, which kicked off with the planting of about 70,000 citrus trees, is on track to meet its target. The produce from the farm is expected to be ready for export by 2024.

Selebi Phikwe Citrus will be one of the largest consolidated citrus developments in southern Africa. It is located near Selebi-Phikwe in the Central District, Botswana. Intended as a flagship horticultural project for the country, it will provide a source of employment for up to 1500 people (permanent and seasonal) when fully operational. In addition, it will provide indirect benefits to the local economy such as increased economic activity and food supply.

The production target of the project is to grow citrus fruits such as the Star Ruby, Premium Mandarins, Eureka Lemons and Valencia Oranges on 800ha. The remaining 400ha will be used to grow a variety of other fruits

The official groundbreaking of the project was done by His Excellency, the President of the Republic of Botswana, Dr. Masisi and the First Lady, Neo Masisi.

This project has an investment value of P500 million and it continues to be a flagship project in the SPEDU Region. It currently employs around 228 workers.

The 800ha Phase 1 is expected to be completed by June 2022. The project occupies 1 500ha land of Mannaesi Farm, which belongs to Mmadinare Multipurpose Cooperative Society. Seventy percent of production is targeted for export.

The farm water needs are met by a 10 kilometre pipeline which runs from the water utilities plant near Selebi-Phikwe. All sorts of challenges came up during the construction of the line: If it wasn’t rain pouring down and flooding the trenches that were dug, It was skeletons that were uncovered along the pipeline route.

After the research is done, the bones will be reburied close to their original resting place and clearly marked, hopefully not to be disturbed again. The remains are said to be the oldest complete skeleton uncovered in Botswana to date, so this find is of particular significance to the country.

Subscribe to our digest
Tweets by forward_trade
PrevPrevious PostNamibia to promote artisanal fisheries and aquaculture
Next PostWhat will 2022 bring for South African citrus?Next